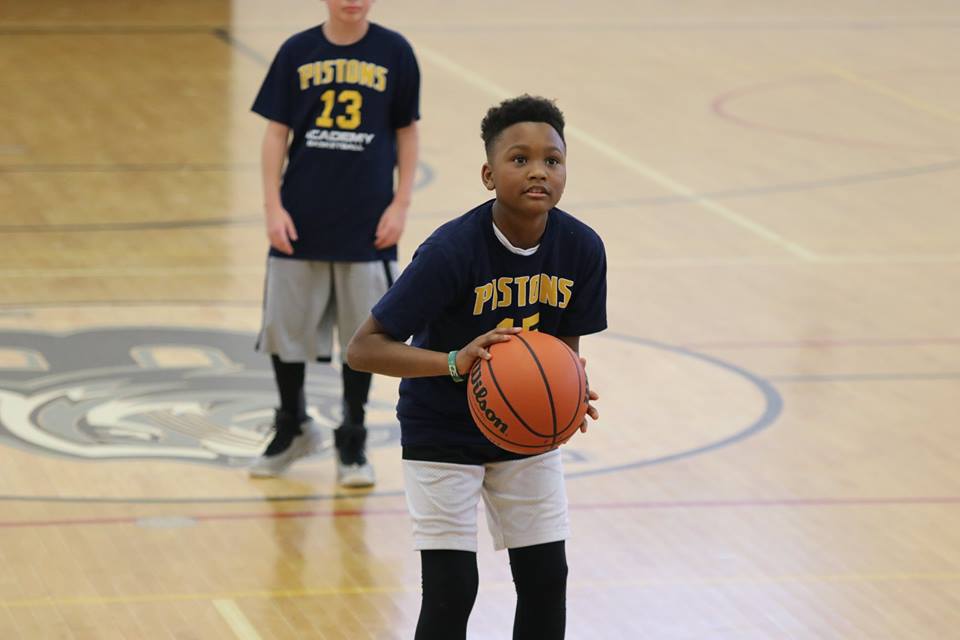 SPARKS 23, WINGS 11: The Sparks evened their record at two wins and two losses on the season behind a balanced scoring attack and smothering defense. Clara Guffey (8 points), Lily Stafeil (7 points) and Ella Blank (6 points) led the way for the Sparks (2-2). The Wings struggled to get things going offensively but will look to build on the performance and continuing improving in the second half of the season. Thalia Pierre scored 6 points for the Wings (0-4) and Neema Baddam added 3 points.

RAVENS 21, KNIGHTS 19: The Knights (0-3) have played some very competitive basketball this season, but came up just short of picking up their first victory of the season. Xavier Jones (8 points) and Drew Zusel (7 points) paced the Knights, but it wasn’t enough to overcome the solid play of Luca Spadafore (13 points) and the Ravens, who moved to 3-1 on the season. Grant Hulgrave and Zackary Kozouz each chipped in 4 points for the Ravens, who appear to be a well-rounded squad capable of beating any team in the Prep Division.

BLACKHAWKS 19, WARRIORS 18: Lance Kukes scored a game-high 14 points for the Blackhawks (2-1), but none were bigger than his free throws with 0.6 seconds remaining on Saturday. With time running down and his team trailing by 1, Kukes was fouled and sent to the free-throw line. He calmly sank a pair, leading his team to the thrilling 1-point victory. For the Warriors (2-1), who suffered their first loss of the season, it was a heartbreaking finish to a phenomenal basketball game. Both teams displayed toughness and perseverance, a credit to the players and coaches for putting on a great performance. The Warriors were led in scoring by Devin Young (8 points), Leo Uhrik (4 points) and Jayen Bastani (4 points). Jared Barnett added 4 points for the Blackhawks (2-1), who moved up to third place in the Prep Division standings.

WARRIORS 15, HEAT 0: The Warriors (1-2) picked up the “W” via forfeit on Saturday as the Heat (2-1) had only 4 players present. To their credit, the Heat decided to play it out for one half with only 4 players, but a full-strength Warriors team was too much to overcome for the Heat. Both teams traded players and scrimmaged for the second half of the game, utilizing the gym time as a chance to compete and get better. All forfeits are registered as a 15-point victory by default.

WOLVERINES 35, HUSKIES 14: The Huskies, playing just their second game of the season, were able to keep pace with the Wolverines for much of the first half on Saturday. However, a late first-half surge from the Wolverines propelled them to another nice win. Evan Singleton scored a game-high 13 points, with Kyle Moore and Devin Warren each chipping in 6 points for the Wolverines, who move to 3-1 on the season. The Huskies were led by Mason Rothschild’s 9 points and Omari Pointer Jr.’s 5 points. While the Wolverines appear to be a contender in the College Division, keep an eye out for the Huskies as they are a resilient bunch and capable of going on a run as they gain more experience playing together in the second portion of their season.

LAKERS 34, PISTONS 33: In another close game at Berkshire, it was the Lakers (1-2) who squeaked out the 1-point victory over a tough, and previously unbeaten, Pistons (2-1) squad. Jeffrey Sheldon and Brandon Counts led the way with 15 and 12 points, respectively, for the Lakers. Trevor Perry played a solid all-around game for the Lakers, dropping in 5 points, grabbing 5 rebounds and dishing 3 assists. The Pistons were led by Benjamin Rosenfield’s 15 points and Kareem Hassouna’s 8 points.

ACES 18, COMETS 7: Midway through the first half on Saturday, it seemed as if there was a lid on the basket for both teams. Although they were competing hard and executing their respective offense to get good shots, neither team could find the magic touch and remained in a scoreless tie until Ari Parker knocked down a beautiful pull-up jumper. It was the first of many baskets for Parker, who went on to score a game-high 15 points for the Aces (3-0). Hailey Lossia scored 3 points for the Aces, who received quality defensive performances from Addison Wolfe, Mia Moss and Michele Barnett. The Comets (2-1) had a rough day shooting the ball, but suffered only their first loss of the season. They will look to get back on track and appear to be a dangerous squad. Yazmyne Thorpe (3 points), Nadia Whalen (2 points) and Lily Garrett (2 points) paced the Comets in scoring.

CAVS 33, SPURS 31: Anthony Egdell (10 points), Aryeh Ferber (6 points) and Omar Zeni (6 points) led the way for the Cavs (2-1) as they won a close, competitive game over the Spurs on Saturday. Max Kramer lit it up for a game-high 23 points, but it wasn’t quite enough for the Spurs (1-2), who are still adjusting to a new roster and learning how to play together.

CELTICS 52, SPURS 36: In the second game of a back-to-back, without some key contributors, the Spurs struggled to keep pace with the Celtics in the first half. The Celtics (2-1) got off to a strong start and led 24-13 at the halftime break. The Spurs kept things closer in the second half, but the Celtics responded and picked up the win. Jack Hulgrave (17 points) and Rishi Thota (16 points) formed a nice 1-2 combo for the Celt’s. Max Kramer played another solid game, pouring in a game-high 26 points. Daniel Gonzalez scored 7 points for the Spurs, who fell to 1-3 on the season. They will look to get back in the win column next weekend.

HOYAS 33, SPARTANS 12: The Hoyas jumped out to an 8-point lead in the first half and were able to extend that lead in the second half behind 19 points from Chase Kukes, who is having and MVP caliber season for the Hoyas (2-1). The Spartans played tough but could not overcome the inside presence of Kukes. Amir Mufarrah scored 2 points and Michael Taylor added 1 points and 3 steals for the Spartans (0-3), who will look to learn from the contest and continue improving. It is just a matter of time before this team begins to click and they could pose a real challenge come playoff time. Dane Zeff added 6 points and Andrew Bickersteth scored 4 points for the Hoyas.

HAWKEYES 36, GRIZZLIES 23: The Hawkeyes (3-0) continued their impressive start to the season, rebounding from a 13-12 halftime deficit and outscoring the Grizzlies (0-3) by 14 points in the second half (24-10). Jared Tobias scored a game-high 12 points, and Avi Meltser and Asher Langwell each added 6 points for the Hawkeyes, who sit in 1st place in the College Division standings. The Grizzlies were led by Jordan Scott (11 points), Griffin Fleischer (7 points) and Max Freedman (5 points).

TIGERS 40, HOOSIERS 36: Ari Blank and Grant Main each scored 10 points to lead a balanced attack for the Tigers, as they pulled of the second half comeback to take down the Hoosiers. Trailing 19-16 at the break, the Tigers rose to the occasion and outscored the Hoosiers 24-17 in the second half. Quran Creary led the Hoosiers (1-3) with 16 points, Aiden Binder added 7 points, and Lewis Donaldson chipped in 6 points, but it wasn’t enough to overcome the resilient Tigers, who moved to 2-1 on the season. Nolan Davis scored 8 points and William Butcher chipped in 6 points for the Tigers.

CHARGERS 30, RAIDERS 11: The sharp-shooting Saba Pachulia netted a game-high 20 points on Saturday, including 4 three-pointers, as he propelled the Chargers (3-0) to another victory. The game was competitive during the first half, as the Raiders only trailed 10-4 at the break. However, Saba Pachulia began lighting it up for the Chargers, as they cruised to their third straight win. The Raiders, who fall to 1-2 on the season, were led by Christian Banks (4 points), PJ Kommer (2 points) and Jonah Frank (2 points). Davit Pachulia added 6 points and Joseph Keyser added 2 points and 3 assists for the Chargers.