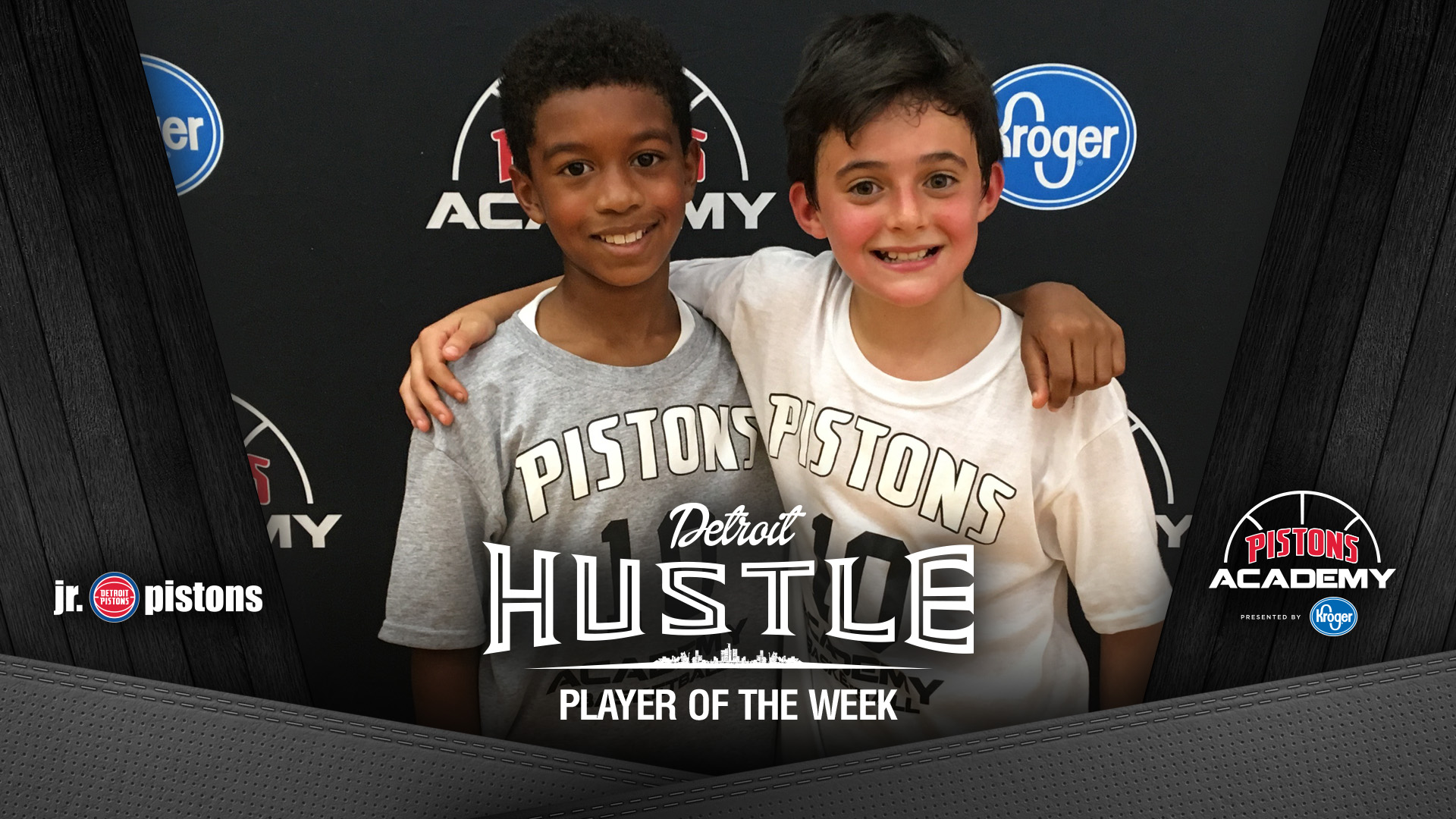 HUSTLE PLAYERS OF THE WEEK

Congratulations to this week’s “Detroit Hustle” Co-Players of the Week, Bryce Parker and Ryan Kay!

HAWKEYES 29, BRONCOS 26:  In a game that saw seven lead changes in the second half alone, The Hawkeyes were able to outlast the Broncos in a fantastic Friday night opener. Trailing by three at halftime, the Broncos defense stepped up as they outscored the Hawkeyes 12-6 in the third quarter and took a 22-19 lead into the fourth.  But Dominic Taylor and Bryan Pohl combined for eight fourth quarter points as the Hawkeyes pulled away for good.  Taylor paced the Hawkeyes with 12 points.  Broncos guard Mikias McKinney led all scorers with 14 points.

HOOSIERS 29, TIGERS 29 (OT):  Trailing for most of the game, the Tigers (1-0-1) rallied for 12 fourth quarter points to force overtime and eventually a tie.  Trailing 20-15 with 8:27 to go, Joey Hesano scored two quick baskets and Brady Klein hit a go-ahead triple with 2:14 remaining in the game.  Both teams traded baskets in the final two minutes and overtime resulting a stalemate.  Hoosier forward Nolan Davis had a strong game and scored six of his game high 15 points in the second quarter.  Hesano finished with 10 points for the Tigers while Bode Bogosian had a solid game with four points and five rebounds.

FALCONS 20, BLACKHAWKS 13:  In the only Prep Division game of the afternoon, the Falcons used a balanced scoring attack to obtain victory as six of their seven players scored at least two points.  Jack Barlage paced the Falcons with six points and CJ Brown dished out three assists.  The Blackhawks had trouble scoring early but rallied in the second half and stayed even with the Falcons in the final 16:00 as each team scored eight.  Tyler Robinson led the Blackhawks with four points.

CELTICS 36, HEAT 33:  Celtic point guard Parker Levin hit the go-ahead three-point shot with 5:20 left in the game as the Celtics won their opening game of the season. The Heat had built a seven point lead early in the second half when the Heat stopped moving the ball.  Santino Ruma (7pts) missed nine consecutive shots allowing the Celtics to take a one-point lead.  Heat forward Brandon Brown ended the drought with a fast break lay-up, giving the Heat a 28-27 lead.  But then Levin, who scored 10 of his 12 points in the fourth quarter, responded with a 22-foot triple from the top of the key and the Celtics never trailed again. Chase Kukes paced the Celtics with 13 points.  Brown led all scorers with 18 points including 5-7 from the FT line.

WOLVERINES 36, SPARTANS 22:  The Wolverines used some sibling scoring and tight defense to styme the Spartans 36-22 at Berkshire Middle School on Saturday.  Cousins Christian and Anthony Abro combined for 18 of the Wolverines 36 points.  The Wolverines outscored the Spartans 14-6 in the final seven minutes. The Spartans, playing with only seven, received inspiring performances from Max Reger (eight points) and Ashton Williams (eight rebounds). The win keeps the Wolverines (2-0) in first place in the College Division.

HOYAS 37, HUSKIES 13: The Hoyas defense was impressive Saturday, especially in the second half as the held the Huskies to just six points in the final 18-minutes. Both teams struggled in the third quarter as only three points were scored by both teams combined.  The Hoyas took advantage of some 4th quarter match-ups and outscored the Huskies 14-6 in the last 7:22. Hoya forward Lance Kukes led all scorers with 16 points while Parker Rost added six.  Devin Young paced the Huskies (0-2) with five points.  The Huskies Ryan Kay and the Hoyas Bryce Parker each had three steals and were named co-winners of the Kroger Hustle Player of the Week!

SONICS 46, SPIRITS 41: A balanced scoring attack led the Sonics to the opening weekend win over the Spirits. The Sonics (1-0) jumped out to an 11-point lead at the half, but the Sprits would come storming back in the 2nd half. Ben Diskin scored 22 points, Rishi Thota added 9 points, and Spirits got within a couple of possession late in the game. Mori Miller paced the Sonics with 10 points, while Kareem Rathur added 9 points and Charlie Iverson chipped in 8 points, as they held on to pick up the win.

TROPICS 41, BULLETS 33: The Tropics set the tone early in this one, as Ethan Wise scored 11 of his game-high 21 points early in the 1st quarter. The Bullets (0-1) would storm back behind a late flurry of scoring, but were unable to complete the comeback. Blaine Proefke led the Bullets with 16 points, including 4 trifectas. John Chinonis added 10 points for the Tropics, who move to 1-0 on the year.

PISTONS 35, BULLS 20: The Pistons cruised to a 15-point victory behind Alex Hesano’s 13 points in the season opener for both teams. The Bulls struggled to find open shots, partly due to the Pistons defensive effort and partly due to a lack of spacing, but there were plenty of positives to build on. James Chinonis, Christopher Edwards and Luke Salkowski each scored 6 points, and Christopher Chuney looks like a nice point guard. With some additional time together, look for this Bull’s team to mesh as the season wears on. The Pistons received 11 points from Nick Shenefelt and 9 points from Abe Miller.