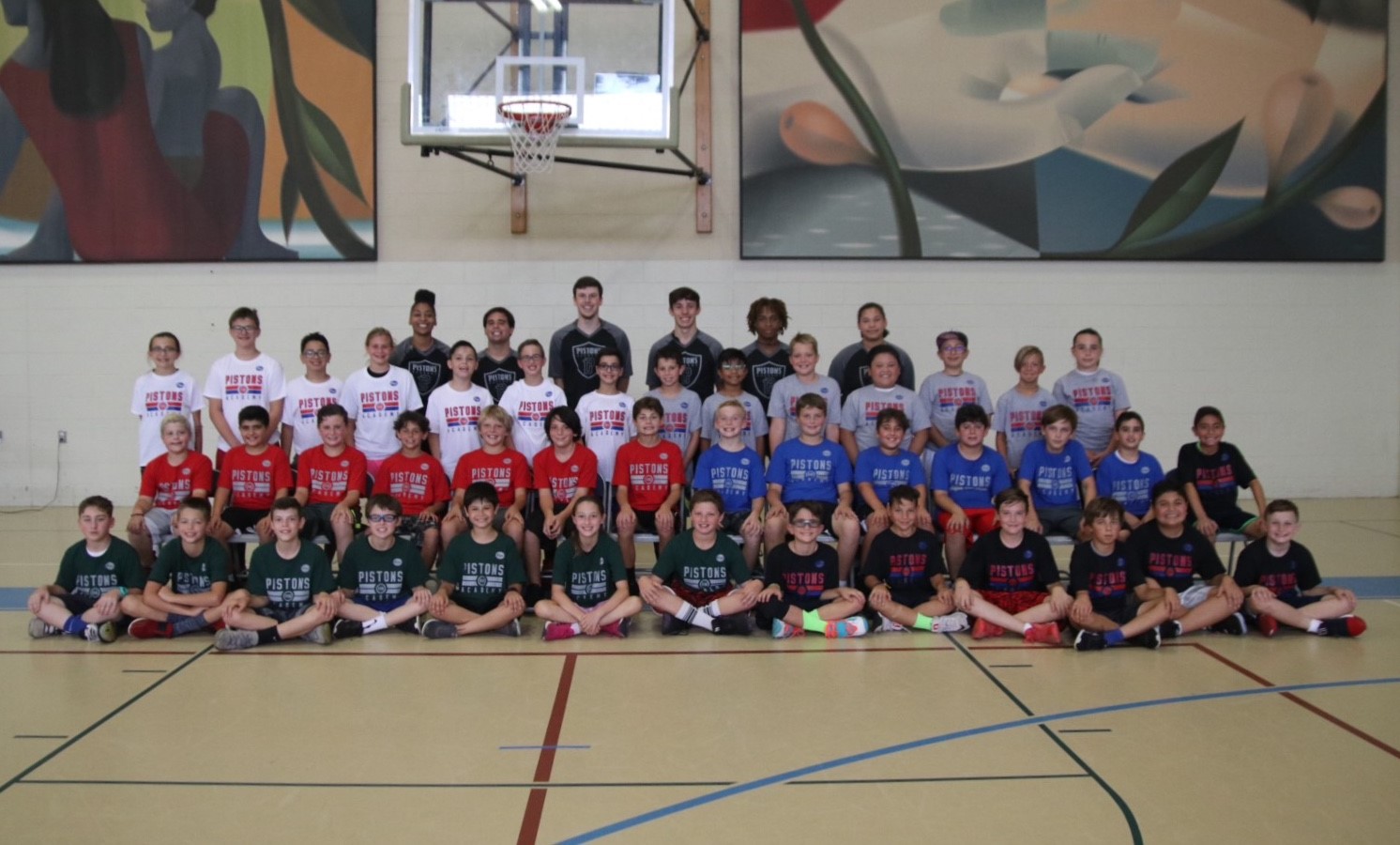 Monday was Day 1 of the annual Ultimate Hoops Week basketball camp at Cross of Christ Church in Bloomfield Hills. A sold-out crew of over 140 campers and nearly 25 coaches filed into the gymnasium on Monday ready to embark on the week-long “basketball party” that is the Ultimate Hoops Week.

“The Ultimate Hoops Week is always a ton of fun for the kids, as the focus is primarily on team play and competitions,” said Camp Director Geo Thomas. “There are still the traditional Pistons Academy competitions like the Free Throw Championship and 1-on-1 Contests, but this week is really centered around games and 5-on-5 play. Each camper is drafted onto a team and will be assigned a coach to work with them throughout the week,” he added. “Coaches will be teaching team concepts and set plays during practices and games this week, and will be working hard to help their team and players reach their full potential.”

On Monday, campers were sorted into one of four divisions: Red, White, Blue and Platinum. Teams were drafted and players will aim to build team chemistry and prepare for Friday’s playoffs.

All games on Monday were “pre-season” games. The “regular season” will begin on Tuesday. Team standings will be posted daily beginning Tuesday evening.

Beginning Tuesday, select players will be recognized for their performance during camp. Be sure to check back tomorrow to see which players caught the attention of our coaches and stood out from the rest of the campers.

NAME THE PISTON: I played 9 seasons for the Detroit Pistons. During my time with the Pistons, I averaged 18.4 points per game and shot 85% from the foul line. In 2004, I helped lead the Detroit Pistons to their 3rd NBA World Championship. Prior to playing in the NBA, I won an NCAA Championship at UCONN. WHO AM I?

If you think you know the answer, write it down on a 3″x5″ piece of paper and turn it in at check-in on Tuesday. Correct answers will be entered into a raffle for an autographed item.

All campers received a special edition camp shirt. Players must wear this shirt to camp each day.

All players must check-in each morning. Camp check-in begins at 8:40am.

Lunch orders must be placed each morning at check-in.

There will be an awards ceremony at 1:30pm on Friday. Family and friends are welcome to attend.