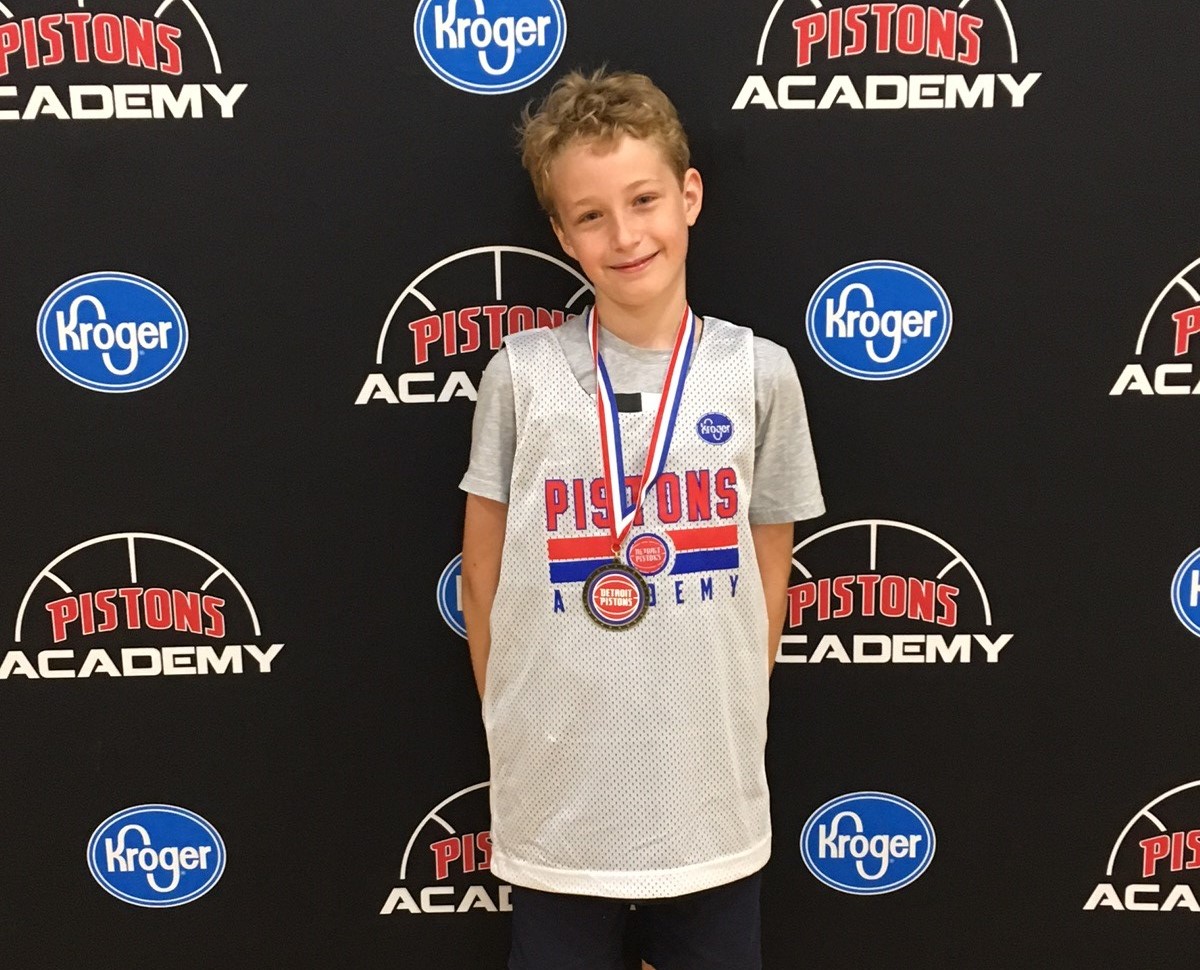 The second day of the Pistons Academy Camp at Morey Courts in Mt. Pleasant was twice as strong as Monday as campers focused on the the core value of RESPECT.

“Respect is a great characteristic to have,” said Blue Division Coach Kylynn Willis, “Respect is something you can earn simply by giving it to others.  It can make all the difference in a strong team, business or community.”

Many campers understand the concept and have been very respectful this week. Campers like Charlie Bennett, Kamara Cooper, Braddy Edwards, Brenna Kroska, Juno Pierce and Gavin Sander have all developed a reputation of being respectful and sportsmanlike.  However, the one camper who truly showed the most respect, both on and off the court, was Torren Robinson (pictured above).  “Torren was always courteous and engaging,” said Coach Jiliian after camp, “I noticed that he was always pleasant and well-mannered off the court. On the court he really appeared to respect the game and his opponents.  Very Cool!”

Today was a great day in 4-Ball as teams continued to push the high score totals.  In the Blue Division, three of the six teams have passed the 100-point benchmark while three other teams have scores of 92 or higher. In the younger division, Indiana topped the 100 point mark but Gonzaga still has the lead with a 6-2 record.  View the 4-Ball standings here: MtP 4-Ball Standings

In the Free-Throw contest, campers continued the “Ish Smith” meditation experiment.  Here are the results: On Monday, 37 of the 52 campers (71%) showed an increase in scoring after meditating for 90 seconds before shooting . Today in the second round, campers did NOT meditate and 31 of the 52 campers (61%) reported a lower score than the morning session when they did meditate. In the end, Torren Robinson totalled the highest score through two days (36pts). He has a slim 3-point lead over Lucas Petry (33) and a 4-point lead over Payton Butkovich (32). For all the Free-Throw scores, click here: Mt. Pleasant FT Scores

Name the current Detroit Piston who helped bring the three core values (Hustle, Respect, Hard Work) to the Detroit Pistons and the Pistons Academy.  HINT: he played his college ball at Oklahoma!

If you think you know the correct answer, write it down on a 3×5 piece of paper and turn it in at check-in for a chance to win some cool prizes! Don’t forget to put your name on it!